Jay Li from SecondDay sat down with Raul Flores, a freelance designer at Wethos teams interested in web design, photography, UI/UX, and digital media. They discuss how to break into the social impact/non-profit space as a “creative”, what it means to be a designer in today’s day and age, and how to move forward in our professional and creative development.

“Hel-...an you he-ar me? ‘Ello..?” Ah, yes, the familiar, sweet crackling of bad video call quality. To be honest, I was just trying not to hear any cracks in my own voice. Though I’m a design student in the middle of college, I didn’t know what to expect when I set up a time with Raul, a fellow designer, to simply chat. Chat about what?

That’s my bad for not preparing a script from the start, but in hindsight our candor was key to this conversation.

Call it a crisis, but I was beginning to think about what I’d do when I finally grow out of my “ramen is a real meal”/“I don’t need more than 4 hours of sleep” phase of life as a college kid, which has me crumpling up that professional development pamphlet I get handed outside my dorm.

I could see myself really loving design and taking the first steps to building a career steeped in creativity, art, and communication. But a small part of me was scared absolutely shitless: There was a lingering fear that the late nights in my dorm spent furiously rearranging letterforms or flying through color schemes might not pan out into a meaningful and positive career. Does that doubt even go away after college?

These looming doubts about my future as a creative fueled my conversation with Raul.

It was a blessing in disguise to just ‘talk design’ with someone equipped with a heftier toolkit and more expansive know-how. Raul spent years gaining skills and honing his craft, though on a road a little less traveled: He declared a Computer Science major at a large university. When he learned arrays of data weren’t for him, he took a crucial step years later to pursue a career steeped in design-- something that previously hadn’t seemed like a viable career option.

After getting an Associate’s degree in Design at a community college, he entered the military through a delayed entry program meant for high school students. His foray in the army consisted of discovering communications and PR through a 25-series Military Occupation Specialty job, and took him everywhere from Maryland for traditional design instruction, to the Philippines to help local radio stations, businesses, and people improve communications. “Paperwork,” he cited, when I asked how he ended up serving in the army for such a long time (eight years and change).

“I always wanted to do something on the side but didn’t want to be a volunteer because it does eat up a lot of time, so I like that [Wethos] was pairing professionals with orgs to be better [in design],” Raul explained.  He explained that early on he didn’t have many expectations for his freelance work, and even admitted he held judgements based on the “stigmas of nonprofits not being savvy in design”.

It took him a few months to get into the swing of things; “I signed on maybe April and didn’t get my first gig until June or July.” But what kept Raul coming back to Wethos was the incredible team support: The co-founders put in “the leg work” and interacted with everyone to produce a worthwhile service for nonprofit organizations, and their freelance teams. “You can really see [the Wethos team’s] passion, how often they’re online to get resources for you...they’re bettering the community, just nurturing the clients they work with and striving to do more,”

Raul excitedly replied as he thought about his time at Wethos so far:

"It floored me when I saw the people that they bring in, whether it be from a strategy, writing, or design standpoint, excel amazingly at what they do. It pushes me to produce really good quality work and not half-ass a project when others are going above and beyond. I thought it was going to be low-barrier design but it’s interesting and awesome.”

I was curious how Raul reconciled his work in design with how he spent his time in general, so I peppered him with questions weighing on my mind:

How do we better position ourselves to find purposeful opportunities like Wethos and Second Day?

How do freelancers manage expectations when we all get looped in as ‘creatives’ tasked with everything from content creation to brand development, from social media to UI/UX? Or What should we do when we ‘creatives’ don’t feel valued in our workplaces?

“You’ve got to have that passion,” Raul insisted when I asked about the qualities new designers should strive to have; “The desire to learn and [design] sensibility.”

He mentions that people will try to “Frankenstein” our design process-- picking it apart without considering the holistic outcome-- so nurturing your intuition toward visual principles and harmonious designs will only develop trust with the people you work with. For Raul, it’s the best feeling when people can have faith in his eye for design. “It’s not taking [clients] off the reservation, but taking them into a new space to help them connect [to more people].”

He keeps it succinct when speaking about success as a freelancer: “You have to be more self-directed, to be reliable and self-sufficient. Be able to communicate”. I was also curious about whether working in the field should be about diversifying work experiences or developing specific niche skills. Raul suggested splashing around and trying new things; that ultimately provides the means for you to figure out what you want to invest in.

He mentioned that the earlier and sooner you fixate on trial and error in design thinking, the better off you’ll be. I totally agreed with that idea; a sense of urgency allows us to consistently push the envelope in design.

Towards the end of our time I found myself vocalizing a quiet “mhm” throughout the conversation, which felt like the strongest resonance I’ve experienced while talking about design. It was an “mhm” for being honest, reflective, and responsive to what Raul had to say. It was an “mhm” to reaffirm my pursuit of places that resonate with the fundamental beliefs I hold about design.

Maybe one of the biggest design takeaways from the conversation was, as Raul put it, “to continue pushing forward...and getting down to do the work”.

In my eyes, that means constantly exploring and being bold in experimenting, informing my own design with progress and process, and reaffirming the desire to take the greatest risks for the greatest rewards. And perhaps that’s the lens we ought to evaluate our own careers in. For workers young and old, it’s about collaborating with new people that are driven to do the right thing, engaging in thoughtful  dialogue on a daily basis and never becoming complacent to the work being done. We all need reminders to set and correct our course, and to find the environment and spaces that readily enforce these values for us. 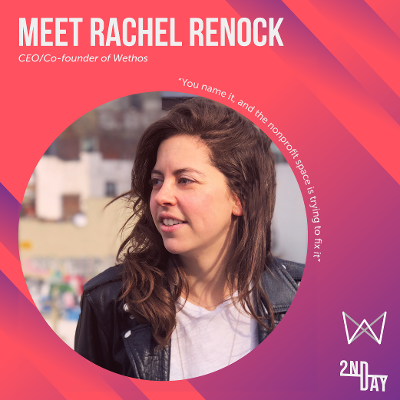 Wethos.co is a platform enabling freelancers to collaborate around more meaningful work by forming teams with professionals in complementary skill sets. These teams are tackling large projects at some of biggest nonprofit organizations because they believe the people solving our toughest problems, deserve the best resources. Join Wethos Teams

Second Day is your go-to hub for building a social impact career. The organization offers resources to those who feel forced to choose between doing good for the world and doing good for themselves. Second Day offers users a personally curated job board that features top social impact jobs. Their team creates original content through company profiles, interviews, and professional development articles to give people a clearer window into the industry. Finally, the Second Day team is readily accessible to offer additional support and mentorship. Headquartered in New York, the team is spread across the United States. For more go to secondday.org.

Wethos is the first platform connecting highly skilled professionals with more meaningful and paid work in an industry that is often understaffed with resources.  Join the collective of thousands of nonprofits and freelancers aiming to make a bigger impact, together.

What We're Talking About

Who Are These People